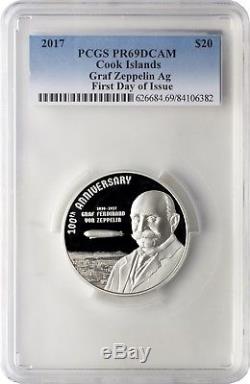 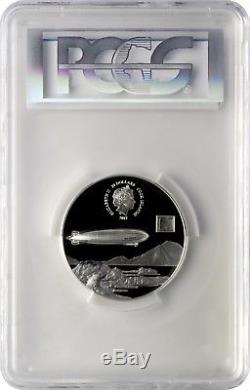 999 Silver Coin PCGS PR69DCAM First Day. Very low mintage of just 499 coins! This coin features a piece of the actual fabric from the LZ127 zeppelin. This coin is graded PR69DCAM by PCGS and is a First Day of Issue. As of 5/20/18 the total number of these PCGS PR69DCAM graded coins is just. Count Ferdinand von Zeppelin pioneered airship construction and flight in the late 19th century. Despite many setbacks, Zeppelin perserved and continued to develop airship flight until his death in 1917. His legacy led to the construction of the Graf Zeppelin airship LZ127 built in his honor. The Graf Zeppelin was not only the largest airship at the time of its completion, but also started the first commercial flight service between Europe and the Americas. Among the most spectacular of its 590 flights that covered over 1.7 million kilometers were the around-the-world flight in 1929 and the polarflight of 1931 which is depicted on the obverse of this commemorative coin along with a fabric fragment that covered the LZ127 prior to being scrapped in 1940 by the German military. This coin comes with the original box and certificate of authenticity.

Please be sure your address is correct before paying for the invoice. As a result, we will often use a stock photo to represent the item.

When a stock photo is used, the actual item you receive is guaranteed to be of the same quality pictured. Weekends and holidays aren't counted. Our products are 100% guaranteed authentic.