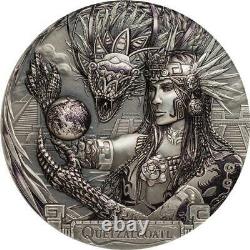 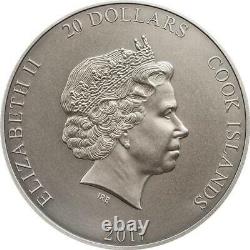 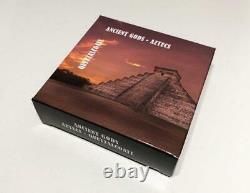 The first issue in the most awesome God series coins. Quetzalcoatl of the Mesoamerican beliefs (Aztec/Maya). 999 silver on a 50mm blank using Smartminting. It gives it an ultimate high relief and added a new special antique finish with dark highlights! Only 333 pcs are released worldwide.

Quetzalcoatl forms part of Mesoamerican literature (Aztec/Maya) and is a deity whose name comes from the Nahuatl language and means "feathered serpent". The worship of a feathered serpent is first documented in Teotihuacan in the first century BC or first century AD. That period lies within the Late Preclassic to Early Classic period (400 BC - 600 AD) of Mesoamerican chronology, and veneration of the figure appears to have spread throughout Mesoamerica by the Late Classic period (600-900 AD). 50mm diameter for 3oz coin. Ultra high relief due to Smartminting technology.

Comes with box and COA. This item is in the category "Coins & Paper Money\Coins: World\Australia & Oceania\Other Oceania Coins". The seller is "zionmetals" and is located in this country: US.