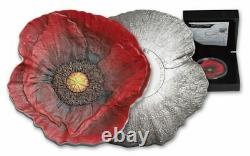 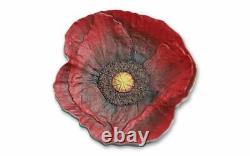 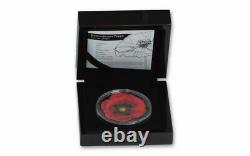 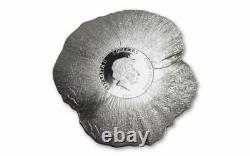 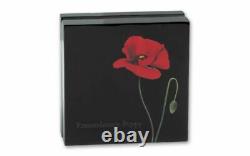 Authenticity and Quality is granted. You will get a similar Item. Return is not accepted if Package is opened. 2017 Cook Island 1 oz. 999% fine Silver colorized Coin: shaped like a Poppy Flower. Remembrance Poppy Proof like masterly crafted coin with beautiful Presentation Box & Certificate of Authenticity. Limited mintage of only 2500 Coin worldwide.

A Symbol of Renewal Following Sacrifice. After the shocking and cacophonous horror of battle is over -- once the smoke and dust have settled and the battlefield regains some modicum of relative calm -- nature can start picking up the pieces. For almost one hundred years, red remembrance poppies have been displayed in Commonwealth of Nations member states such as the United Kingdom, Canada, the United States, Australia, and New Zealand to commemorate fallen soldiers and service personnel. While a novel metaphor, it is a common misconception that the red color of the poppies represents the blood spilled in the brutal battles in Belgium and northern France during World War I. Instead, the red poppies symbolize the red wild flowers that were the first plants to sprout up in the disturbed soil of soldiers' graves.

The practice of displaying red remembrance poppies was inspired by the World War I poem "In Flanders Fields, " by Canadian physician, Lieutenant Colonel John McCrae, on May 3, 1915 after witnessing the death of a friend, and fellow soldier, the day before. The poem read, "In Flanders fields the poppies blow; Between the crosses, row on row" Following a campaign by Moina Michael, a YWCA volunteer, to have the poppy adopted as a national symbol of remembrance, it was proclaimed as such by the National American Legion in 1920. The reverse features a shaped red poppy flower. The obverse of the flower shape is uncolored and features a coin face with the portrait of Queen Elizabeth II facing right. Circling around Her Majesty are the inscriptions "ELIZABETH II, " "5 DOLLARS, " "COOK ISLANDS, " and 2017.

" The inscription "LEST WE FORGET appears on the bottom right of the poppy-shaped obverse. Each coin is certified to be in proof-like condition and will arrive housed in a tasteful glossy black display case paired with its certificate of authenticity. Displaying a remembrance poppy has been an colorful way to honor fallen soldiers and service personnel for almost one hundred years. Thanks' for your time and patience.

I shall be glad if you go to my listing (see other items), you may find what you like or what you are looking for. The item "2017 Cook Islands-Shaped like Poppy Flower 1-oz Silver Remembrance Poppy PL" is in sale since Tuesday, September 7, 2021. This item is in the category "Coins & Paper Money\Paper Money\ World\Australia & Oceania\South Pacific".