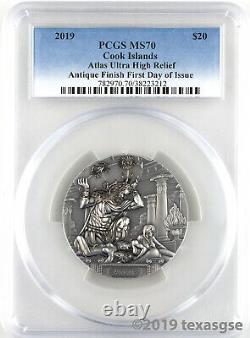 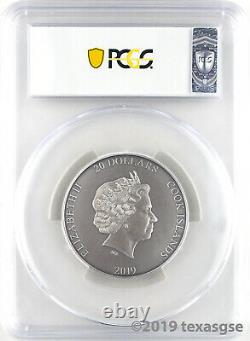 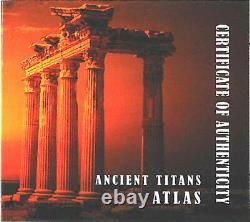 This coin is graded a perfect MS70 by PCGS and is a First Day of Issue. As of 9/18/19 the total PCGS population for this MS70FD is 101 coins. Following the phenomenal success of the Gods of the World Series, the Atlas represents the first issue in the new Titans series. Featuring Atlas, the Titan of endurance and astronomy, and the Hesperides, his daughters, this coin is SmartMinted in 3oz pure. 999 silver with a high relief, antique finish.

In Greek mythology, Atlas was a Titan condemned to hold up the celestial heavens for eternity after the Titanomachy. Atlas also plays a role in the myths of two of the greatest Greek heroes: Heracles (the Roman equivalent being Hercules) and Perseus. According to the ancient Greek poet Hesiod, Atlas stood at the ends of the earth in extreme west.

Later, he became commonly identified with the Atlas Mountains in northwest Africa and was said to be "King of Mauretania". Atlas was said to have been skilled in philosophy, mathematics, and astronomy. In antiquity, he was credited with inventing the first celestial sphere. In some texts, he is even credited with the invention of astronomy itself. Atlas was the son of the Titan Iapetus and the Oceanid Asia or Clymene.

He had many children, mostly daughters, the Hesperides, the Hyades, the Pleiades, and the nymph Calypso who lived on the island Ogygia. This coin has a very low mintage of only 333 pieces. This coin comes with the original box and numbered certificate of authenticity. This item is in the category "Coins & Paper Money\Coins: World\Australia & Oceania\South Pacific".