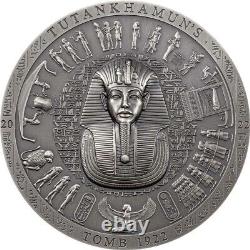 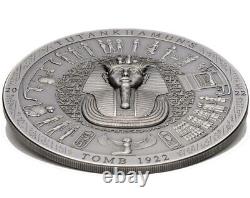 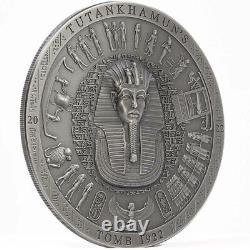 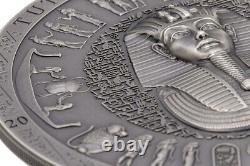 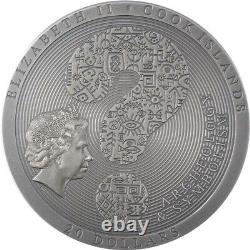 This Beautiful 3 Oz Silver coin is the 8TH RELEASE in the ARCHEOLOGY & SYMBOLISM series, dedicated to the most famous symbols in history TUTANKHAMUNS Taking advantage of the enhanced ultra high relief Smartminting technology puts the tomb in a complete new perspective. The coin has an antique Finish and is struck on a huge 3 oz pure. 999 silver 65mm blank in the highest quality possible. REVERSE of the coin depicts the Tutankhamuns Mask in ultra high relief in the middle. Around the mask are the various hieroglyphs from the walls of Tutankhamuns Tomb. There are also sculptures which are paintings of the walls turned into 3D. On the edge are the inscriptions: Tutankhamuns Tomb 1922 (the name) and 2022 (the year of issue). 1922 is the year of the Tombs discovery. It has ultra-high relief and interesting small details all found in the tomb. OBVERSE side of the coin depicts the Coat of Arms of the Cook Island in a special appearance with the inscriptions: ELIZABETH II (name of the Queen), COOK ISLANDS (the issuing country), ARCHEOLOGY & SYMBOLISM (the name of the series) and 20 DOLLARS (the face value). Tutankhamuns tomb was discovered in 1922 by Howard Carter in the Valley of the Kings located in Egypt. The tomb is renowned for the number of valuable antiquities it contained. Tutankhamuns tomb has been raided at least twice since his mummification; this is indicated by the outermost doors of the tomb being unsealed.

Tutankhamun, also referred to as King Tut was the last Pharaoh in his family to rule during the 18th Dynasty. He took the throne at only eight (or nine) years. Tutankhamun married to Ankhesenamun, his parental half-sister.

In his reign, Tutankhamun restored the Ancient Egyptian religion which had previously been dissolved by his father. However, despite his accomplishments, Tutankhamun was severely disabled and is theorized to have a multitude of different medical conditions.

The discovery of Tutankhamuns tomb, along with the Mask has been one of the biggest and most important discoveries regarding the ancient Egyptians. The coin features the Smartminting technology, has an Antique Finish quality and comes in a beautiful case, along with the Certificate of Authenticity.