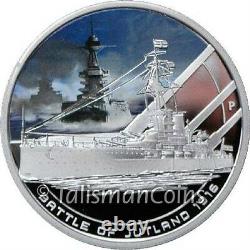 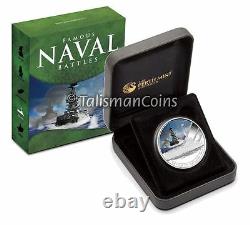 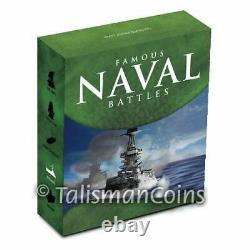 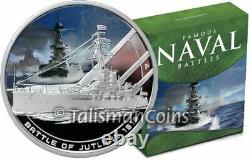 Dreadnoughts clash as the Imperial German High Seas Fleet bloodies the British Royal Navy's Grand Fleet on this full color, pure silver proof! Columns of dreadnought battleships fire tons of heavy metal at each other at the Battle of Jutland! Talisman Coins and the Perth Mint are extremely pleased to present the new Famous Naval Battles Series. Following on the heels of the tremendously well received Famous Battles of History. Program, the Famous Naval Battles Series.

Offers pure silver dollars commemorating five important naval conflicts that have shaped the course of history. All are remembered for their landmark contributions to the annals of naval warfare. The fourth salvo (if you will) is the Battle of Jutland, the indecisive clash of battleships and battlecruisers during World War I. The German High Seas Fleet had been built up by Kaiser Wilhelm II in the decades preceding the First World War, effectively to challenge British control of the oceans, including the North Sea. This buildup is frequently cited as one of the many causes of the war.

The High Seas fleet clashed with the British Grand Fleet on a large scale this one time only, at Jutland, with over 250 ships involved on both sides. Loss of life was terrible - nearly 10,000 men were lost, as three British battlecruisers exploded and sank within minutes when their gun turrets were hit.

On the German side, the "Death Ride of the Battlecruisers" indisputably saved Admiral Scheer's High Seas Fleet, rather than in the decisive victory he longed for. This coin portrays the British flagship.

In all her glory, with the color image showing her leading the Grand Fleet in line ahead, entering the fray of the battle. After sparring for nearly two years, with the British maintaining a distant blockade of Germany's seaports, the long expected clash of the two rivals fleets began innocuously enough on the clear afternoon of May 31, 1916 in the North Sea. Soon, the British Grand Fleet, under the command of Admiral Jellicoe, was hotly engaged with the German High Seas Fleet, under Admiral Scheer.

Jellicoe's Grand Fleet was split into two sections. The dreadnought Battle Fleet with which he sailed formed the main force and was composed of twenty-four battleships and three battlecruisers. British reconnaissance was provided by the Battlecruiser Fleet under David Beatty: six battlecruisers, four fast battleships of the Queen Elizabeth class, fourteen light cruisers and twenty-seven destroyers. The German fleet was outnumbered, but most analysts consider the quality of their ships (especially their armor) and their level of training to have been superior to the British.

As the faster battlecruiser forces engaged first, the British were dealt a cruel blow - one after another, three of their battlecruisers were destroyed by single salvos fired by their German counterparts. Superior German marksmanship told when direct hits on the British battlecruisers' turrets set off massive magazine explosions, a result of their inferior armor.

This caused Admiral Beatty to famously remark to his flag captain, There seems to be something wrong with our bloody ships today. , perhaps the best example of British understatement in recorded history. After Jellicoe and his battleship squadrons arrived on the scene, the punisher became the punished, as his superior numbers pummeled the German fleet. After Jellicoe crossed Scheer's T" for the second time in less than an hour, the German Admiral turned his outnumbered and outgunned fleet to the west using the "battle about turn 180 degrees German.

, but this time it was executed only with difficulty as the High Seas Fleet's lead squadrons began to lose formation under concentrated gunfire. To deter a British chase, Scheer ordered a major torpedo attack by his destroyers and a potentially sacrificial charge by Admiral Hipper's four remaining battlecruisers. Hipper was still aboard the destroyer.

And was unable to command his squadron for this attack. Under Captain Hartog, led the already heavily-damaged German battlecruisers directly into "the greatest concentration of naval gunfire any fleet commander had ever faced", at ranges down to 4 miles (7 km). In what has gone down in history as the "Death Ride of the Battlecruisers", all the German battlecruisers except.

Were hit and further damaged, as 18 of the British battleships fired on them simultaneously. Had two main gun turrets destroyed, with most of their crews killed, but survived the pounding and veered away with the other battlecruisers once Scheer was out of trouble and the German destroyers were moving in to attack. In this brief but intense portion of the engagement, from about 19:05 to about 19:30, the Germans sustained a total of thirty-seven heavy hits while inflicting only two.

While his battlecruisers drew the fire of the British fleet, Scheer slipped away, laying smoke screens. Meanwhile, from about 19:16 to about 19:40, the British battleships were also engaging Scheer's destroyers, which executed several waves of torpedo attacks to cover his withdrawal. Jellicoe's ships turned away from the attacks and successfully evaded all 31 of the torpedoes launched at his fleet (though in several cases, only just barely) and sank the German destroyer.

British light forces also sank. Which had previously been disable. This action, and the turn away, cost the British critical time and range in the last hour of daylight, as Scheer intended, allowing him to get his heavy ships out of immediate danger.

Most amazing of all, though the British lost a total of 3 modern battlecruisers (and 6 capital ships total), the Germans lost only one battlecruiser. The loss of life was atrocious - officially, 6,784 British sailors and 3,039 German sailors (nearly 10,000 men) died in a few short hours at Jutland.

Tactically, the battle was a German victory, but strategically, the British were the clear winners, as the German Fleet remained blockaded by the superior British Grand Fleet. As one journalist summarized, The prisoner has attacked his jailer but is still in jail.

The fate of the once-proud High Seas Fleet would be a memorable one. Having surrendered and been interned at the main British fleet anchorage at Scapa Flow in the Orkneys, the High Seas fleet simultaneously scuttled itself on June 21, 1919. The nine German sailors killed were the final casualties of World War I. For a decade afterwards, debate and recriminations raged on both sides.

Was Scheer outmaneuvered, or was he a brilliant tactician, saving the High Seas Fleet? Wrong with the British ships that fine day? Unfortunately, the cordite flash problem would not be rectified sufficiently to prevent the German battleship. To a quick and watery grave during the next World War. Battle of Jutland Pure Silver Proof.

Is the fourth in the ongoing Famous Naval Battles. Series, to be released by the Perth Mint. The complete collection comprises: Salamis - 480 BC.

Clash of the Dreadnoughts Midway - 1942 AD. Carrier + Five Coin Display Box. Please see the article further below for a short presentation on the Cook Islands. The British dreadnought battleship that served as the flagship of the Grand Fleet at the Battle of Jutland, is in the center of the coin, struck in frosted cameo relief. Behind her are the big guns of a main turret of the battleship, depicted in silhouette. The British Grand Fleet, led by. And steaming in line ahead while firing broadsides from these big guns, is portrayed in the color vignette. The legend BATTLE OF JUTLAND 1916. The Perth Mint's "P" mint mark can be found at the 2:30 position near the edge. Her Majesty, Queen Elizabeth II, in crowned profile facing right. This portrait, featuring Her Majesty wearing a tiara and pearl drop earrings, was executed by the sculptor Raphael Maklouf. The legend QUEEN ELIZABETH II, the date of issue and denomination also appear. The coin is encapsulated inside a handsome taupe leatherette, clamshell-style presentation case, lined with black velvet and satin, and protected by a full-color outer box. An individually-numbered certificate of authenticity is included. Darryl Bellotti (obverse) Raphael Maklouf (reverse).

The Cook Islands are a self-governing parliamentary democracy in free association with New Zealand. The fifteen small islands in this South Pacific Ocean country have a total land area of 92.7 square miles (240 square kilometers), but the Cook Islands Exclusive Economic Zone (EEZ) covers 700,000 square miles (1.8 million square kilometers) of ocean. As of the 2006 census, the country has a total population of just under 20,000. The main population centers are on the island of Rarotonga (14,153 as of 2006), where there is an international airport.

There is also a much larger population of Cook Islanders in New Zealand, particularly the North Island. In the 2006 census, 58,008 New Zealanders identified themselves as being of ethnic Cook Island Maori descent. With over 90,000 visitors traveling to the islands in 2006, tourism is the Cook Islands' number one industry, and the leading element of the economy, far ahead of offshore banking, pearls, marine and fruit exports. Defense is the responsibility of New Zealand, in consultation with the Cook Islands and at its request. In recent times, the Cook Islands have adopted an increasingly independent foreign policy.

The item "Cook Islands 2011 Famous Naval Sea Battles Jutland 1916 $1 Silver Prf FULL OGP" is in sale since Monday, March 19, 2012. This item is in the category "Coins & Paper Money\Coins\ World\Australia & Oceania\Australia\Commemorative". The seller is "talismancoins" and is located in Saint Louis, Missouri. This item can be shipped worldwide.