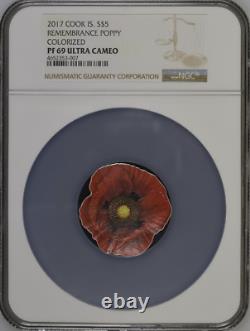 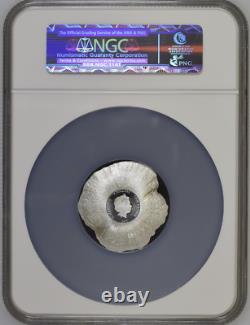 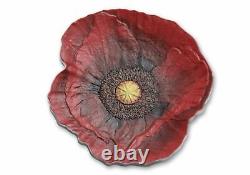 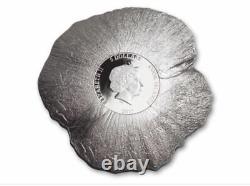 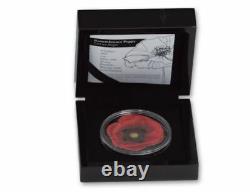 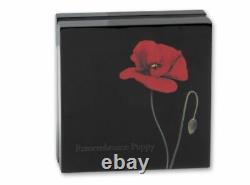 The practice of displaying red remembrance poppies was inspired by the World War I poem "In Flanders Fields, " by Canadian physician, Lieutenant Colonel John McCrae, on May 3, 1915 after witnessing the death of a friend, and fellow soldier, the day before. The poem read, "In Flanders fields the poppies blow; Between the crosses, row on row. " Following a campaign by Moina Michael, a YWCA volunteer, to have the poppy adopted as a national symbol of remembrance, it was proclaimed as such by the National American Legion in 1920. The reverse features a shaped red poppy flower. The obverse of the flower shape is uncolored and features a coin face with the portrait of Queen Elizabeth II facing right.

Circling around Her Majesty are the inscriptions "ELIZABETH II, " "5 DOLLARS, " "COOK ISLANDS, " and 2017. " The inscription "LEST WE FORGET appears on the bottom right of the poppy-shaped obverse. Each coin is certified to be in proof-like condition and will arrive housed in a tasteful glossy black display case paired with its certificate of authenticity. This item is in the category "Coins & Paper Money\Coins: World\Australia & Oceania\South Pacific". The seller is "elitecoinage" and is located in this country: US. This item can be shipped to United States.999 Silver