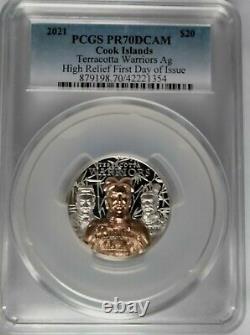 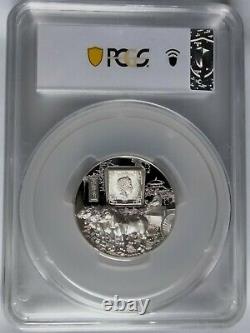 Graded and Guaranteed by the Toughest and Well Respected Grading Company PCGS (Professional Coin Grading Service). Highest Graded REGISTRY Coin With the Popular PCGS Blue Label and Designation First Day Of Issue! 999 silver ultra high relief proof coin is graded PR70 by PCGS and is a First Day of Issue. Mintage was limited to only 500 coins. The PCGS population for this coin as of 06/23/2021 is only 26!

The Terracotta Army is regarded as one of the greatest discoveries of the 20th century! Discovered in 1974 by farmers digging a well, this enormous group of 8000 sculptures amazed the world. The excavation uncovered soldiers, horses, and carriages. This incredible army was constructed to accompany the tomb of China's First Emperor - Qin Shihuang (259-210BC) as an afterlife guard. The most impressive feature are rows and rows of thousands of individually detailed soldiers.

The soldiers were molded in parts, fired in a kiln like pottery, and then assembled and painted. The army laid underground for more than 2000 years until its discovery and is now considered one of the greatest archaeological sites in the world.

The find was praised as the Eighth Wonder of the World and became a UNESCO World Heritage Site in 1987. These stunning proofs show three impressive soldiers on the reverse. Each soldier displays a unique characteristic and the layering of high relief gives them the depth you would experience if you were standing right next to them! The obverse design shows a carriage that serves as one of the vehicles used for the inspection tour of the emperor in his afterlife. Pictured is one of my coins, your coin may have a different PCGS Cert#.

I will combine S&H on multiple wins paid together. Any questions, don't hesitate to ask!