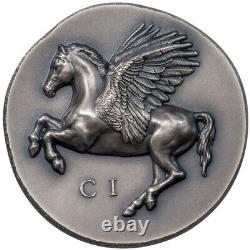 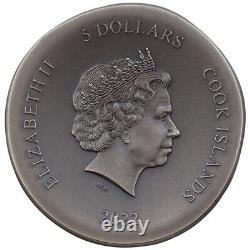 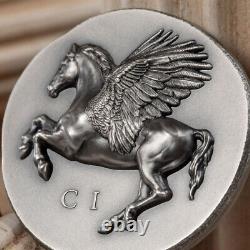 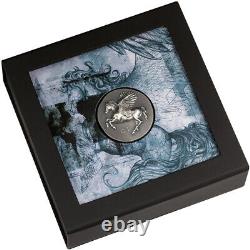 PEGASOS NUMISMATIC ICONS 2022 Cook Islands 1oz silver ultra high relief. Pegasus, or Pegasos as he was called by the Greeks, was a winged horse, born from the liaison of the sea-god Poseidon and the beautiful Medusa.

It is one of the most recognized creatures in Greek mythology. The liaison made the goddess Athena angry, and she cursed Medusa to be ugly and deadly. When she was killed, Pegasus sprang from her neck. Thus the flying horse can be used as a metaphor for the soul's immortality. In modern times it has been regarded as a symbol of poetic inspiration.

Namely, just like Poseidon, Pegasus was capable of creating water streams wherever he'd struck his hoof. At least two famous springs in Greece, both named Hippocrene ("Horse Spring"), were widely believed to have been issued forth by Pegasus' hoof.

Corinth was a rich and quite powerful ancient city and seaport on the narrow isthmus that joins the Peloponnesos with the rest of Greece. Like most Hellenic city-states, Corinth produced its own distinctive coins. Pegasos appears on many coins of them and is one of the most important and known ancient coins. CIT now transfers this iconic symbol onto a modern coin. By using the possibilities of the enhanced smartminting® technology it combines the ancient design e.

The uneven rim with a stunning ultra- high relief. Like the predecessors Tortoise and Athena's Owl Pegasos is a worthy and eye catching modern twist of a numismatic legend.

Featured are a 1 oz silver version 999 pcs. And a 1 oz gold premium edition 199 pcs. For the first time ever CIT releases a gold coin in ultra-high relief with antique finish which supports the ancient look highlighting all details. In addition to the 1 oz gold, there is also a half gram gold version struck in silk finish which provides a wonderful companion piece. So do not hesitate too long and let the horse fly away!

Depicts the Ian Rank Broadley effigy of Queen Elizabeth II surrounded by the inscribed issue details. A certificate of authenticity is enclosed. 31.1 grams (1 oz). This item is in the category "Coins\Coins\World\Oceania/Australasia". The seller is "minted-uk" and is located in this country: GB.