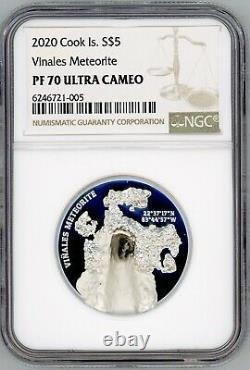 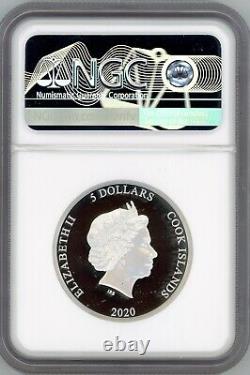 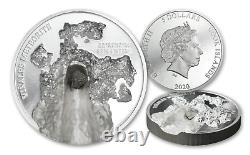 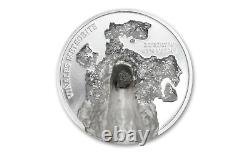 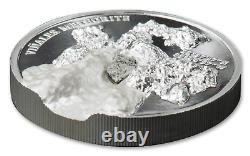 Pure Silver Meteorite Impact Coin Features Piece of Actual Meteorite! February 1, 2019 dawned as a mostly sunny day over Western Cuba. But that peaceful repose was shattered in the early afternoon when a meteorite screamed across the sky. The National Weather Service in Key West confirmed the eyewitness accounts and reported that the meteor left a smoke trail as it traveled past the Florida Keys and impacted near the small town of Viñales, where a strong shock wave was noted.

The meteorite shattered upon impact leaving 40 to 50 pieces scattered on the ground. When it struck the Earth, the Viñales Meteorite created a spectacular crater that scientists have meticulously examined.

Design Mimics Rugged Topography of Meteorite Impact Crater. Part of the Meteorite Impacts series, this coin was not only struck in a full ounce of highly pure 99.9% fine silver coin, its incredibly unique due to the specialized minting process that recreates the impact crater in impeccable detail. The coin features cracks, crevices and even a gouge in its rim to represent the haphazard trail left by the Viñales Meteorite as its slashed its way across the ground. Contains Actual Piece of Viñales Meteorite. The icing on this space-aged cake?

The mint embedded an actual piece of the Viñales Meteorite in each of these coins! According to scientists, the meteorite weighed around three tons before it disintegrated between 60 and 75 miles above the Earths surface. Many Cubans were quick to notice the irony of the meteorites impact site since the areas main tourist attraction was a Prehistoric Mural that had been painted on a mountain depicting dinosaurs that became extinct after a giant meteor struck. Just 2,500 of these otherworldly coins have been struck for worldwide release. Each comes in gorgeous Proof condition and beautifully housed in its original government packaging that consists of a Viñales Meteorite display case and a mint-issued Certificate of Authenticity. NGC Certified PF70 GEM Condition. The 16th issue in the Meteorite Impacts Collection, the 2020 Viñales Meteorite One-Ounce Silver Coin features the actual topography of the crater made by a shower of meteorites in Western Cuba along with the coordinates of the impact crater. The obverse features the bust of Queen Elizabeth II.

The item "Vinales Viñales Meteorite 2020 Cook Islands 1oz Silver Coin NGC PF70 $5" is in sale since Wednesday, April 28, 2021. This item is in the category "Coins & Paper Money\Coins\ World\Australia & Oceania\New Zealand". The seller is "elitecoinage" and is located in Boca Raton, Florida. This item can be shipped worldwide.